Our last encounter with Tranmere was arguably met with something of an overreaction. Yes, it was a shame to go out of the FA Cup so early, but look at the team we fielded: weakened, rootated, whatever you want to call it. Even if the fact that we showed we fundamentally lack the prerequisite qualities to thrive against ten men – of which we were unwelcomely reminded last Tuesday – was justifiable cause for annoyance, look at where we still are in the league. Had we enjoyed four further ties, we would be slightly better off financially (although we’re no longer in dire straits in that sense), but would you trade that for third in the league three quarters of the way through the campaign?

Fine, so we’ve only won six of our 15 games since then – losing eight – but the visitors have endured a truly dispiriting run, collecting a meagre six points from a possible 42. Even Southend, the only side to have lost more times than Rovers in 2019/20, have tasted victory twice to their once in that time. Look at SoccerSTATS‘ trusty form tables and the highest they rank anywhere is 14th in the eight-match away standings. Should that be of concern to us? Not really; they’ve not taken a single point off a team in the top half since mid-October – a smash-and-grab 1-0 victory at Coventry – and have drawn a blank in three of their last four on the road, most worryingly of all at fellow relegation zone dwellers Bolton and Southend in their last two. If you believe in jinxes, you’ll tell me to shut up now; if not, you’ll agree that we should – regardless of our recent up-and-down form – be going out there and bumping up the goal difference we effectively wiped out during December and January.

*I only found out this week that WhoScored’s aerial figures (which come from Opta) likely only include aerial duels contested in the final third – hence the change!

Simply getting the win at Bolton was a must, but the manner in which we got it was undeniably a bonus. We can cast the calibre of opposition to one side; for the first time in months, we played with fluidity – relatively speaking, of course, this is Wycombe after all – for the majority of the 90. Now, in the sanctuary of Our House, the stage is perfectly set for us to back that up in style and break free from this seemingly inescapable LWLWLWLW sequence (although, for what it’s worth, continuing that to the end of the season would see us finish on 74 points – almost certainly enough for the play-offs). A 21st minute system tweak proved the key up in Greater Manchester, and there should be no reason to re-tweak it at the moment.

The system which won it for us was the trusty 4-3-3, only with a couple of faces in positions where we don’t tend to see them. David Wheeler’s show-running shift in midfield was, depending on who you ask, Luke O’Nien or Keith Ryan-esque, while Paul Smyth enjoyed a proper stint on the right – where he looks totally at home – for only about the fifth time in Wycombe colours. As for that Fred Onyedinma bloke on the left, well, it was just a joy to see him in (close to) full flow again – and we should all be absolutely buzzing about what’s still to come from our true superstar.

It would be easy to say that a home meeting with currently the poorest team in the league is exactly the kind of game for a player with Fred’s nightmare-inducing magic. And it is, but it’s really a game for everyone. While Micky Mellon will no doubt have been hard at work on the training ground trying to right the snowballing wrongs, Tranmere’s defending all season long has left much to be desired. Looking back over just their last three defeats (at home to Pompey and Doncaster and away to Bolton), there is no clear pattern in terms of the seven goals conceded; they just look a disorganised shambles. Despite having an uncharacteristically torrid time against Donny, Manny Monthé – an imposing unit who has handled Adebayo Akinfenwa with minimal fuss on occasions in the past – has shone as one of their leading lights throughout the campaign, helping to keep scores down with some warrior-like contributions – but even he can’t do it all by himself, as it sometimes looks like he tries to. A second clean sheet in ten last time out might sound encouraging, but Bristol Rovers were once again wasteful in front of goal. There’s a reason these Rovers’ defensive record is the worst in the league except for the bottom two.

Rovers’ last goal in any competition was Paul Mullin’s extra time winner to knock an incredibly youthful Watford side out of the FA Cup – a full four weeks ago. Their last league goal came in the home defeat to Ipswich five days earlier – a towering header from Monthé. But their last league goal by an attacking player? Play-off final hero Connor Jennings’ ultimate consolation in a 4-1 home battering by Coventry (that sounds familiar…) on New Year’s Day. Since then, they’ve created one big chance – which they missed. It’s always worth testing Ryan Allsop with a stinger from distance, hoping to profit from a rebound, but it would appear from Rocky’s shot-stopping last weekend that he’s taken a crash course in parrying the ball away from danger. Kieron Morris and Morgan Ferrier did the damage in the two cup ties – the former can be a real handful on either flank, while the latter isn’t a regular starter but seems to cause us problems with his pace and power whenever we face him (he also has a belting finish in his locker) – and flamboyant wide man Corey Blackett-Taylor can tear it up on his day, but scattered individual quality hasn’t been enough for Tranmere – although the general philosophy of going long will have made it difficult for their more technically gifted players to consistently strut their stuff. January arrivals James Vaughan and the returning Andy Cook are both proven strikers in the lower leagues, but chances for them to put away have been few and far between thus far.

It can be a little difficult to preview games like this without coming across like I’m underestimating the opposition, but we’re deep enough into the season to be objective about the gap (not a gulf, it rarely is in League One) between the two teams. David Wheeler made a couple of very pertinent points in his pre-match presser – Tranmere have “shown how good they can be” and sides fighting for their lives are often a tougher proposition than those entrenched in mid-table – but we know how good we can be. Of course, last Saturday’s triumph was not our only recent win – but the winning formula was more convincing than that which vanquished Bristol Rovers, Blackpool or Rochdale. Are we “on our waaay” again? We might have a smidge better an idea when that full-time whistle blows. 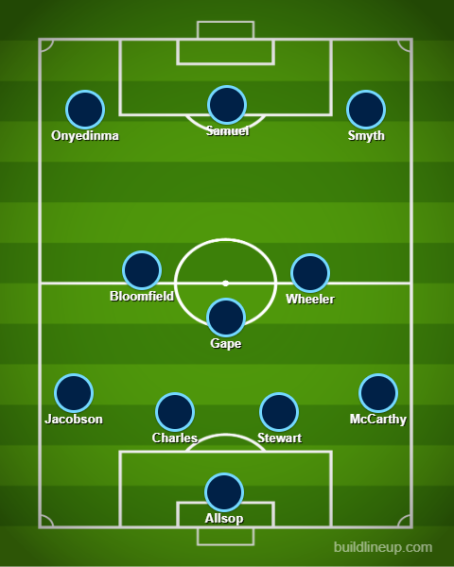 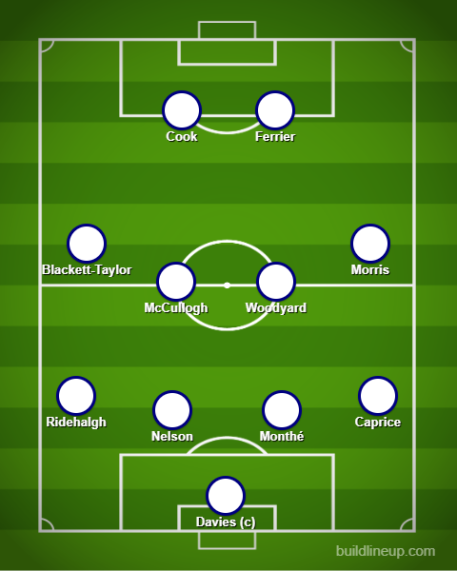 In the Middle: Charles Breakspear