With Luton and Plymouth exiting the third tier at opposite ends last season, we’ve found ourselves with just one real ‘needle fixture’ this time around – and we’ve been waiting six months for the rerun! Straight after that aptly dull 0-0 draw in the wind and drizzle at the Memorial Stadium, neither of these sides will have sensed a special run coming, but the Gas came within tasting distance of the rarified air of the League One summit in the autumn. Then, out of the blue after December’s season-high win at Ipswich, guiding light Graham Coughlan left to be closer to home with Mansfield in the division below; Rovers fell away and haven’t won since. New boss Ben Garner – previously an assistant at Crystal Palace and West Brom – has spent around half of his tenure on personal leave, so first team coach Kevin Maher has overseen much of the slump. Having scored a paltry four goals in their last nine games, collected just four points from a possible 27, and surrendered the lead in their last two outings, it’s fair to say the visitors are not shipshape.

It’s just a shame we’re not in much better shape ourselves. We still hold the league’s best home record – losing only one of 15 games and taking 36/45 points – but made somewhat heavy work of last month’s 2-1 victories over Rochdale and Blackpool. There was some mouthwatering stuff on show in the latter, though, which we need to build on – not least after that absolute pancake of a performance last weekend. This is the kind of clash where a big result can lift spirits more than it ordinarily might – and what better an occasion than Gareth Ainsworth’s 400th game in charge? It’s been almost four years since we beat the Gas on home soil – when Luke O’Nien notched a late winner – and I don’t know about you, but I feel a storm brewing ;). 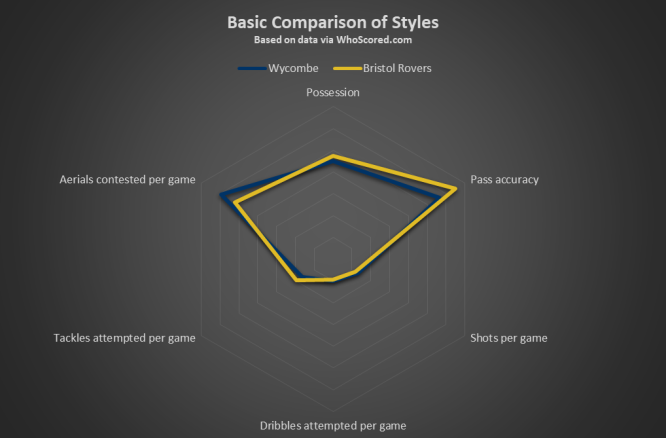 The sooner we erase the memory of our soulless performance at the soulless bowl, the better, but it goes without saying that we need to learn from it. We looked sluggish, one-dimensional and just a shell of the team we know we can be. Our away form has to improve and fast, but we’ve got two home games now with which to send out a statement that we can stay in the play-off race, and to go to Bolton next Saturday a refreshed outfit.

First things first, our Achilles heel: wing-backs. Yes, Bristol Rovers play wing-backs. Oh. Worse still, they operate in a 3-4-3 – i.e. Sunderland’s preference which tore us a new one at the Stadium of Light. Ok, we had a centre-back at right-back that afternoon, but we’ve appeared hapless every time we’ve come up against such systems. The home draw with Ipswich was the slight exception, but with the amount of chopping and changing they do, it was no surprise that they didn’t inflict nearly as much damage as Sunderland, Peterborough or Coventry *shudders*. Rovers may be third bottom of the form table over ten games, but they’ve used a back three/five for most of the campaign; there is genuine cause for concern on our part.

So how do we alleviate that worry? Well, extra width would be a good starting point. Coventry had a field day with our bizarrely narrow diamond set-up, but the 4-3-3 isn’t a great deal more reassuring. With Adebayo Akinfenwa back from his business trip across the pond, we can go 4-4-2 and give his partnership with Josh Parker – something which would at least be handy to have in the back pocket some more valuable bonding time. In fact, Parker’s 20-odd minutes off the bench at MK were sprinkled with little moments of encouraging invention – audacious efforts which none of our other strikers would try.

How we configure our wingers could be key in this one; Rovers’ wing-backs exhibit contrasting styles and strengths to which we probably ought to tailor our approach. On the right, Alex Rodman is adept in the air and a solid crosser of the ball, meaning David Wheeler’s aerial superiority and superb positional awareness could be vital in disrupting the man who played an integral role in Shrewsbury’s play-off final season of 2017/18. Meanwhile, over on the left, Paul Smyth’s tenacity and drive make for a potentially intriguing match-up with Tareiq Holmes-Dennis, who’s also fond of a dribble but – naturally as an actual left-back – is more defensively-minded than Rodman. And what about Fred Onyedinma? He’s been back in training for the best part of a month now and has been going through his paces before the last few games. Surely he’s close? Surely? Anyway, you can have a butcher’s of some dedicated Fred-pining here.

As four our still-unsettled back four, they’ll have the task of dealing with a lesser-spotted front line: a very compacted three, a 2-1 triangle if you like. Talisman Jonson Clarke-Harris – scorer of 22 League One goals in the past 12 months and a thorn in our side in his Coventry days – is a threat in and outside the box (although his 11 goals this term have come from inside it), racing onto through balls and those over the top – and he’s no mug in the air either. The fact that he’s complemented by two lively, skilful supporting players in Josh Ginnelly and Jayden Mitchell-Lawson – on loan from Preston and Derby respectively – should keep Darius Charles and co. on their toes. Despite losing and drawing after going ahead on both occasions, the Gas registered a total of 27 shots (12 on target) against Coventry and Bristol Rovers; something seems to be starting to click and we’ll need to be at our best to make sure we’re not the ones on the end of its fruition.

Charles should return after sitting out the last one for reasons we well know. Dom Gape and Curtis Thompson provide an amply robust core in a four-man midfield, but Matt Bloomfield could come back in should we continue 4-3-3. David Stockdale’s error in North Bucks was not as bad as it first appeared nor critical, and everything else he did in that game only asserted his class.

This is the 11 which Garner named for the loss to Coventry. Rovers been spoilt in the goalkeeping department this season, with former Wanderers loanee Jamal Blackman making yet another loan departure from Chelsea to replace the injured Anssi Jaakkola, who’s been quite a revelation on the Avon. The veteran Tony Craig also spent time at Adams Park way back in 2004/05 – and bagged gas’ second goal in their 2-1 victory here in August 2018. Save for a few local non-League loan spells, skipper Ollie Clarke is a one-club man, making over 250 appearances in the blue and white quarters.

In the Middle: Tom Nield